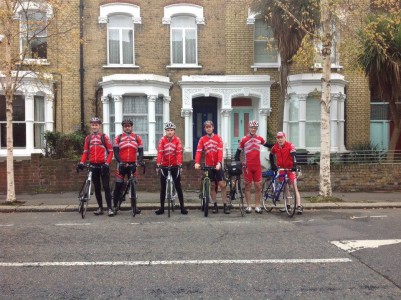 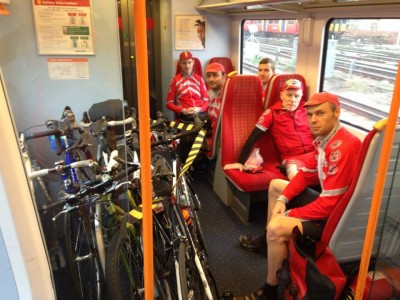 This year the YHA weekend’s destination was the South Downs YH – a converted farm by the village of Southease, a few miles north of Newhaven. Ian had proposed we take the train out of London, to cut out some of the tedious city miles and enable us to start a bit further west. I suggested Guildford as a good starting point, my lack of familiarity with south London leading me to forget that this would require us to cross the lumpy Surrey hills as our first obstacle.

So it was that shortly after 10am our party of six – Ian, Vince, Costas, Richard, Matthew and I – mounted our bikes and rode out of Guildford station car park. After not quite managing it last year we all had the route on our Garmins, though that didn’t stop us immediately taken a wrong turning! Soon though we were back on course, had left Guildford, and were following one beautiful little lane after another on the route Ian had mapped out for us.
The Surrey hills proved especially lovely on an early autumn day, though quite why Ian had chosen our route to twist in and out of them with so many ups and downs was perhaps best known to him. A little later, as we started to descend the last of the hills and turned onto a very quiet lane, that then became a muddy track, the explanation perhaps began to become clearer: this was Ian’s first time creating a Garmin route and we were his guinea pigs!
There was a certain amount of grumbling at this first off road section, but by the end of the second we all seemed to be beginning to enjoy the novelty of lifting bikes over stiles and keeping upright on leafy footpaths. Average speed was however suffering and by noon we had only covered 15 miles with another 20 to go before we reached our lunch stop. Fortunately, it was tarmac all the way, with Vince even hitching a tow behind a speeding tractor at one point in a bid to make time.

Finally, a little later than planned, but still in time for lunch, we arrived at the Jolly Tanners, a pretty, old and definitely non-gastro pub, where we were made very welcome and ushered into our own private room to enjoy excellent Sussex beer and food – the chicken, steak and ale pie, liver and bacon, and omelette all hitting the spot.
On our way again, Sussex’s leafy lanes continued to deliver idyllic peaceful riding. Ian’s course continued to deliver unplanned off-road sections. Not content with taking us down footpaths it started to lead us through farms and down private roads. Ian and I were ahead and at the sound of a barking dog and a female voice decided to keep going. When the others failed to appear we guessed that our arrival had not been altogether welcome. Eventually they caught us up to report that the farmer’s wife had thought us “very naughty” for not stopping… The threat to smack our bottoms was though the work of Richard’s imagination.

It was getting late and we were keen to make a farm shop just south of Lewes for breakfast supplies before it closed at 5pm. Not only did we make it in just in time but were rewarded with excellent tea and cakes – the courgette cake proving especially tasty. As we passed through Northease, we knew Southease could not be far away and so just after passing through what must be one of the most timeless beautiful villages in England we arrived at the youth hostel.
The YH was everything Alfriston had not been last year. Clean, spacious, light and airy, it was only opened 18 months ago. It was a lovely building with the oldest parts dating from the early medieval times and ancient lancet windows. The only slight downside in its isolated location was the nearness of the only local pub, 1 ½ miles away, though in the end riding there in the dark, a blaze of lights on the pitch black lanes, was a lot of fun.

Well fed and watered, with the conversation ranging from cycling, to cycling, by way of, oh, cycling, and I’ll admit quantum physics and near death experiences (don’t ask!) by the time we returned to the hostel we had dissected and put the world to rights on TT start sheets, vets standards and road racing skills amongst others. I’m sure we reached many profound conclusions but unfortunately the next day no-one could remember what they were.

The next morning saw the traditional cooked breakfast underway. No black pudding unfortunately this year, but all the other ingredients were there and we were soon off again on the return journey. Matt it was this time who had mapped out the route, with rather fewer (OK, none – take note Ian!) off road sections, and with the wind behind us we flew through Lewes, past Plumpton race course, over Turners hill and into Redhill, where Vince left us to take the train. Up onto the North Downs and not a bit too early we reached Fanny’s Farm Shop, where it seemed obvious that we should buy a whole cream Victoria sponge and split it four ways.
Slightly overfed, we were now on the final leg. The route down the Streatham high road and through Brixton wasn’t exactly pretty, but it was fast, and by 2pm we were north of the river and on our way home. 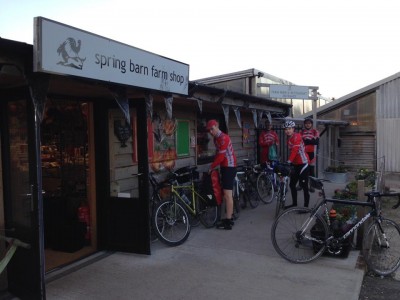 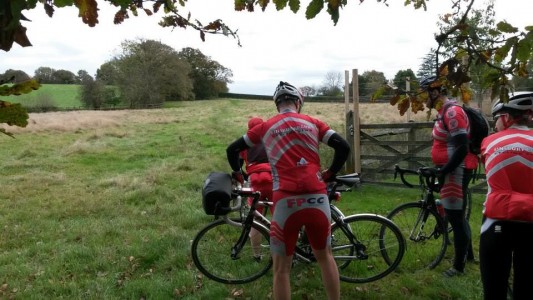