Eric was the third 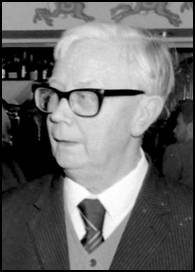 longest serving club member with 76 years membership. (Dick Curtis 83 years and Jack Lauterwasser 79 years). He was the last known link with the pre War years. Eric’s first recorded event was the club medium gear 25 on 20th March 1938 when he did 1-19-42. On the 3rd April he recorded 1-18-00. Very little other information can be found regarding his time trial history.
Having seen numerous colourful badges, Eric suggested that the club badge needed a revamp and should be more colourful. This idea was soon squashed by the club’s elder statesmen of the day. In 1938 Eric received 1 guinea from an anonymous donor for his contributions to the club gazette.

There appears to be very little mention of Eric until 1941 when around March or April he was called up for war duties. He was now known as Pte Mason A.E. 7671541 R.A.P.C. (Royal Army Pay Corps). It was not long before Eric started a club for like minded soldiers where he was stationed. Again very little is recorded regarding Eric’s Army life. In February 1946 Eric was stationed in Rome and eventually arrived back home in October that year.

1948 and Eric sold his bike and headed for a new life in the U.S.A. A few months later and Eric was back home, somewhat disillusioned with America. 1950 and Eric took on the role of club captain, but only for a short time. In August he was called up again (just how unlucky can you be?) for the Korean War. He was posted to the Far East and ended up in Japan having a ‘good time’. By December 1950 Eric was doing Guard Duty in Japan, and had been promoted to Corporal. Eric must have had some home leave because on June 4th he did 1-11-22 in the inter-club 25 with the Aylesbury CC.

Like many club folk, Eric’s racing career was interrupted by the War and he never really got back into it. However, Eric was a staunch clubman, always at club dinners, on club runs, the VP’s Tea Run, marshalling or on Easter or Whitsun tours. He contributed many articles to the club gazette, and one recalled a solo tour to the Scottish Highlands in 1956.
In March 1965 Eric surprised his fellow club mates by getting married.
Eric lost his sight some years ago and was also going deaf. He will be fondly remembered by older club members as one of the most friendly and helpful club members and his passing closes another door on the club’s great past.