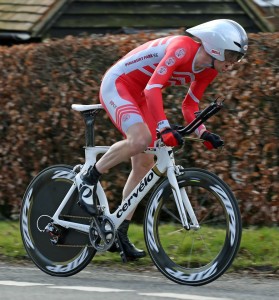 SPOCO REPORT – And they’re off … just.  It’s 10.16 am, Sunday morning.  Jeremy Greenwood (SPOCO debutant – keen as mustard) start time 10:51.  Dominic Bray start time 11:01.  Current Time: 10.21.  Location: Dom’s car, M25 between Potters Bar and Cheshunt.  Speed: 0mph.  Estimated time to arrival (courtesy of Google Maps) 1hr 26 mins.  But suddenly there was a chink in the traffic, things were moving, slowly, a little faster, faster still, and then all was clear, but it was going to be tight.   We hared into the car park at Navestock Village Hall at 10:34 – allowing for a languorous 17 minutes for Jeremy to get his bike off the roof, wipe his hands, check his hair, pick up his number, check his hair, have a pee wipe his hands (kids might be reading), check his hair, attach his number, final check of hair, put on his helmet, check his hair through his helmet, and off to the start, with at least three minutes to spare.  All good.

Then to small matter of the Hainault Hilly.  Hilly by name, and hilly by nature.  Not Alps hilly , or even Little Switzerland hilly, but hilly enough, and also extraordinarily windy.  The brothers Turnock had matching disc wheels on the rear (well, they looked the same from a distance, but no doubt Gray’s was significantly superior) – and I think Phil Murrell too, but Jeremy and I didn’t fancy sailing off into the fields, and, more to the point, don’t have disc wheels.  Details.   So, windy, and hilly, but the sun was shining and spring was in the air; a cracking day and a cracking course, and a liberation to be heading out at full bore after weeks on grinding on the turbo or trudging around Regent’s Park in the dark, and after the disappointment of the cancellation of hardriders last week, and even more so given that half an hour earlier Jeremy and I had thought it was going to be another raceless week.

So, moving quickly to the end because, after all, there’s a lot that one can say about a time trial that is of much interest to anyone else: we started; we rode like kings, our hearts bursting with passion our legs steaming with vigour; we rode on straight flat roads with the wind behind us and felt like pros; we rode uphill with the wind against us and felt like pathetic children; we went screamed round corners; we tiptoed through gravel.

But to the end, the end, the result.  A Second in the team competition – a great start to the SPOCO year, courtesy of Gray, Andy and myself.  Gray firing right from the off with a most commendable third overall, despite inappropriate equipment (his words not mine).   And then he embarked on what he called a ‘cool down’ on the turbo, for twenty minutes, headphones on, from which he emerged as red as his FPCC skin suit and sweating like a pig.  What was he listening to?  A nice sit down and a cup of tea seemed far more effective to the rest of us.   Andy and I joint 14th – EXACTLY the same time – who would credit it, after 29 miles, not a second between us.  Phil Murrell at 18th.  And SPOCO debutant Jeremy Greenwood at 39th, and for that he gets a prize, for 39th?!  £10.  Lucky dip.  They all count, especially when it’s a tenner.  Relevant times/places were:

SPOCO SE (www.spoco-se.org.uk) open to all, great courses, easy way into time trialling, fabulous training for roadies, hard test for testers, civilised start times, and good fun for all.  Check it out.  Anyone can enter individual events.  Anyone can enter the SPOCO competition anytime, but your rides only count to qualification once you have entered.   As well as this week’s crowd, it’s good to see Mark Morris has signed up for a couple, and Anthony as well I think.  Peter Bullen will be there, and Ian Bibby we hope, and Neal Marrin. Check it out – join the fun.  I have some clip-ons if anyone wants to borrow them.  Jeremy’s looking for a TT bike – that’s the spirit.  Hooked after one ride!